Lately I’ve been busy promoting The Wildlife Artist’s Handbook on various internet sites. It suddenly dawned on me that the one place I haven’t talked about it since publication… is on my own blog. *FAIL* 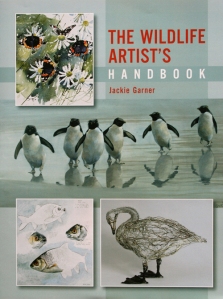 Never mind, I can rectify that now. The book was published right at the end of 2013, but fortunately just in time for me to get the Christmas orders out. Waiting for the consignment to arrive was a nail-biting time, because the ship bringing the books from the printer to the UK was delayed en route. Every week the publication date seemed to be pushed back, until it seemed that publication might not even happen until 2014. Thankfully, after a few heart-stopping moments, everything was resolved in time and the book was published in December.

I was so excited to hold my own books in my hands at last, and really thrilled with the result of two years of hard work. Even better is the response I’ve had from other artists. Those who kindly supplied images of their work for the book, have been overwhelmingly positive. I’ve been so happy to hear comments such as “It’s a brilliant book”, “I’m so pleased to be associated with your book” and “You’ve done a fantastic job” from my peers. Artists were very generous with lending their work, so I’m very glad they feel the result was worthwhile.

Perhaps more importantly though, is the feedback from the buyers themselves. My aim was for the book to be useful, and certainly both verbal and written feedback has proved I succeeded. Of the eight reviews so far on Amazon, seven have given it the 5* top rating, and one person who was buying the book for a relative gave it 4*. (You can see the reviews on the book’s Amazon page.) Not only has the text proved useful, but many people have told me how much they have enjoyed the images.

The proof of the pudding is in the eating, so maybe the most telling statistic is that the Handbook’s sales figures. It sold double the first year’s sales target in just the six months following publication. No wonder the publishers say they are “delighted”!

So that’s a very positive start. I have signed copies available, and the book is on sale at the usual online and High Street retailers. (Even W H Smith, the only big name not to stock it initially, has done a U-turn and now has it available.) If you don’t have a copy yet, perhaps it’s time to treat yourself. Go on, you deserve it.